Street art is big in Catalonia

The Catalans obviously like their large pieces of street art, some very elegant, some historic and some just a bit mad.

In Barcelona, in the Horta-Guinardó district, there is a huge box of matches (22 meter tall) on the intersection of a main road, and nearby, enormous broken or burnt out matches, supposedly from the same box of course! This piece of pop art was created by the swedish artist Claes Oldenburg and it’s called “Els mistos”. It was created for the 1992 Olympic Games to decorate the Vall d’Hebrón olympic zone where the tennis, volleyball and some other competitions were taking place. You can find it in the intersection of Avenida del Cardenal Vidal i Barraquer and Carrer del Pare Mariana. Click here to find directions.

Just up the coast in the tourist town of Platja d’Aro, there is a colony of gigantic ants in a park that look as if they’re eating the grass….like they do! 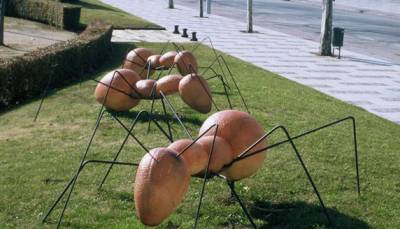 And they even light up at night! 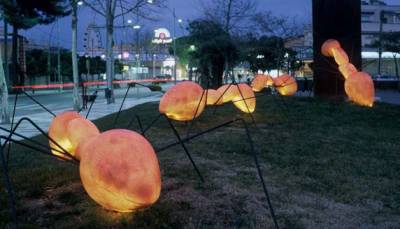 In the same town, just off the main roundabout is a normal size herd of sheep that are actually meant to eat grass and a sheepdog…….not eat the sheepdog, just that there is one. These sheep are very appreciated between the Platja D’Aro residents and very frequently the City Council receives offers from their citizens to buy one of these sheeps for their personal courtyards. 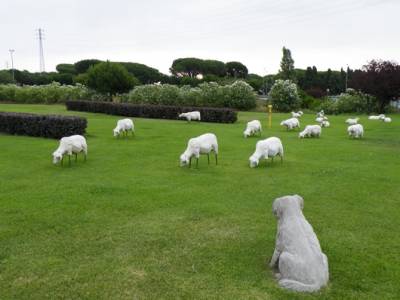 Back in Barcelona, down by the Port Vell marina, there’s a huge happy lobster! This amazing sculpture was created by Javier Mariscal, mostly known by being the designer of Cobi, mascot of the 1992 Barcelona Olympic Games. This giant lobster was created to sit above Gambrinus bar and it fact was Gambrinus image for many years. Some years later almost all the bars from the area closed down but Barcelona City Council bought this sculpture and restored it just to keep there as it has become an icon at the Port Vell marina. 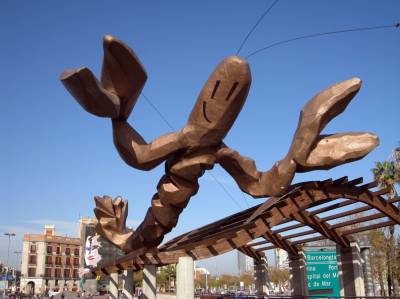 Not far from there, on the Rambla del Raval you can find a fat deformed cat created by Fernando Botero in 1987. This cat has been moving around Barcelona in different spots (Olympic Stadium, Drassanes, Ciutadella Park, etc) but finally has seemed to find it’s place in the young and fashionable Rambla del Raval. 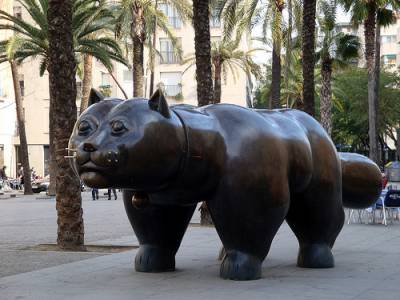 This same well-known artist created another big animal sculpture located in Terminal 2 of the Barcelona airport: Botero’s horse. This statue is used by thousands of travellers each day as huge meeting point. “Let’s meet at the giant horse”, is something very common to be heard when you need to meet with someone at Terminal 2. 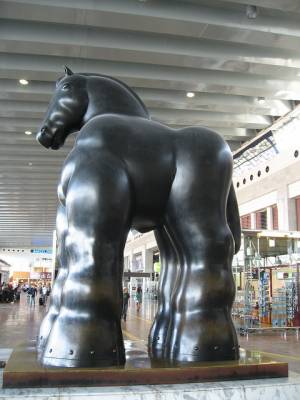 Back in Barceloneta you can admire a huge tower of wobbly glass and iron boxes right in the middle of the beach! This crazy sculpture was created by the German artist Rebecca Horn for the 1992 Olympic Games and is called “L’Estel Ferit”, however it is commonly known as The Cubes. 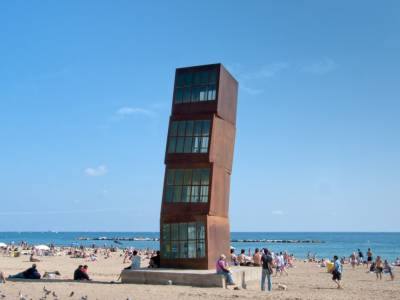 In various points, scattered around Barcelona, large pieces of pasta shells (Galets) are placed in the streets, that light up at night, during the Christmas period. Galet soup is the traditional catalan starter for the Christmas meal. This odd tradition has been was started in 2009 by the City Council. 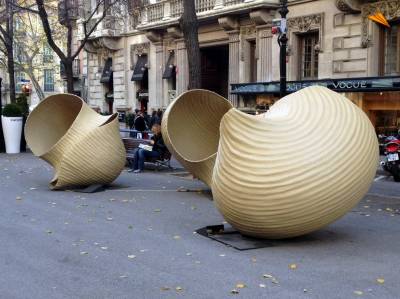 Down the coast in the city of Tarragona stands one of the most bizarre statues yet, it is in the memory or honour of the grand Transformer himself, the one and only Mazinger Z……how brilliant is that! 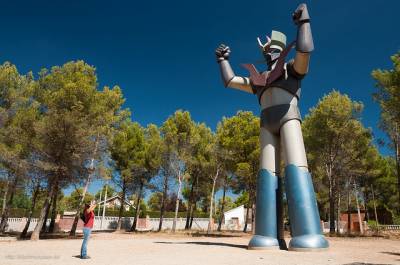 The shortest street in Barcelona

Street art is big in Catalonia