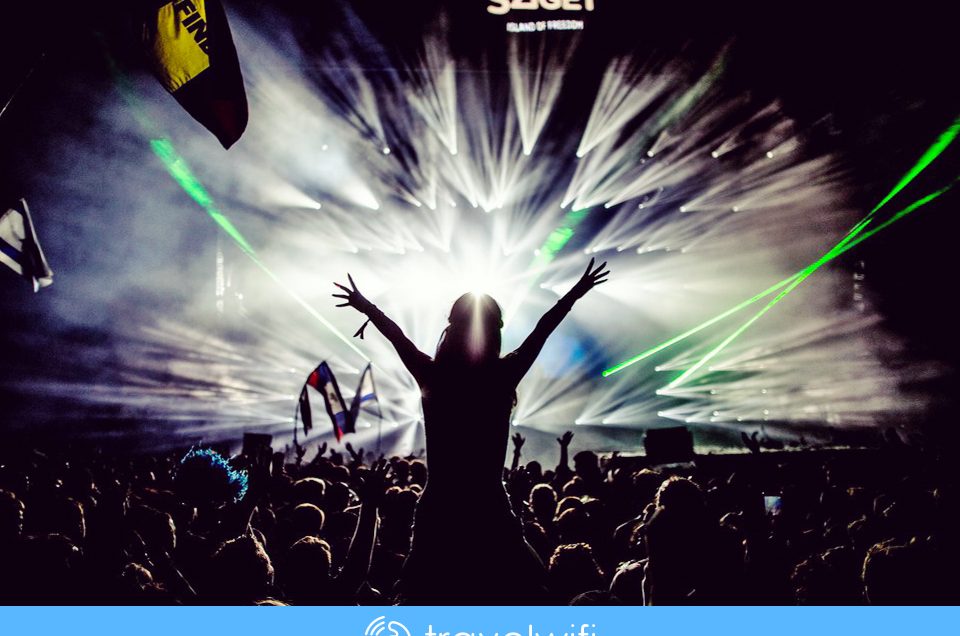 Coucou! It’s mid-summer, and the festival season is officially on! With your backpack on the shoulder and your Travel Wifi in the pocket, we know you’ll be travelling to at least one country in Europe. So, why not collect festival memories? But which one to attend? Scroll down, we are here to help you choose!

Sziget is probably one of the top festivals that come to mind when you hear the word ‘festival’. It’s not only a festival, but a lifestyle with its own island and over 500,000 Szitizens. Sia, Rihanna, David Guetta were just a few of the many performers in the past couple years. This year, the famous festival will celebrate it’s 25th anniversary between August 9th and August 16th. The Szitizens will watch Kasabian, Pink, Jamie Cullum, and many more performing live, and enjoy over 1000 programs while having the week of their lives.

Here is what Sziget looks like. If you like what you see, the island of freedom is waiting for you.

Aie aie aie, Barcelona… The charming Spanish city with beaches, sangria, a heaven for tapas and the location of the famous Woody Allen movie, Vicki, Christina, Barcelona. Well, Barcelona is more than that. It is home to Sonar Festival. Even though this year’s Sónar took place between 15-17 June for the 24th time, we thought it would be a shame not to honor this famous event.

This alternative electronic music festival divided 24 hours by day and by Night. During day time, most of the headliners performed in Plaza d’Espanya whereas in the evenings famous DJs ruled over the city in local clubs. The famous American hip-hop group De La Soul, the Swedish king of dance floor Eric Prydz, and the French duo Justice performed in this year’s event. In addition to live performances, each year there are numerous other workshops, conferences and shows regarding music industry.

Live today, love tomorrow, unite forever… That’s the slogan of People of Tomorrow. That being the case, Tomorrowland Festival was shaped around the idea of ‘Mother Nature, Respect, Health, Nature, Responsibility and Innovation’.

The participants may choose to stay at DreamVille and benefit from various accommodation options, the welcoming party The Gathering, Marketplace and Tastes At Dreamville.

David Guetta, Paul Van Dyk, Disco Dasco, Nina Kravitz and many more will be performing in the 13th edition of Tomorrowland between July 21st and July 23rd in Boom, the Belgian town located between Brussels and Antwerp.

Check out here for the virtual tour!

Born in Miami, expanded to Australia, Singapore, Japan and South Africa, Ultra Europe is the European address of Ultra World Wide events. Each year, around 150,000 electro music enthusiasts gather in Split, the second largest city of Croatia, to dance to famous musicians’ and European DJs’ songs. This year, the festival will take place for 5th time, and the line-up will be Afrojack, Carl Cox, Jewelz & Sparks and many more.

If you are wondering how Ultra Europe was last year, here is the aftermovie.

Here is another reason why you should visit Paris this summer!

Well known concert series Lollapalooza is landing in Paris for the first time this year! Nonetheless, don’t underestimate the line-up; Red Hot Chili Peppers, Alt-J, Lana del Rey, Oscar and the Wolf, Martin Solveig, and Imagine Dragons are only few of the names performing in the very first Parisian edition of Lollapalooza

The festival will take place just outside of Paris, in Hippodrome de Longchamp on the 4th weekend of July. The French corner, Lola Chef will also be there to welcome guests with French delicacies, so, one would say this event is perfect for ear as well as for stomach.

Are you missing Lollapalooza? No problem at all! You can still enjoy Rock en Seine, the most famous French festival which will take place in Domaine National de Saint-Cloud for three days between August 25th and August 27th. The name comes from << scène >> meaning stage in French and pronounced the same way as the river Seine. Hence, the festival could both mean Rock at Seine River or Rock on the Stage (don’t we all love word games?). From 2003, when it started as a 2 day festival with only 10 bands, Rock en Seine continues to attract more and more people every year.

This year’s line up includes The XX, Franz Ferdinand and MØ. To have a sneak peak of the festival, listen to Rock En Seine Spotify list.

Exit Festival is the biggest festival organized in the Balkans. This event is defined to be an independent State Of Exit reaching historical Petrovaradin Castle on the banks of the Danube River. It proves a dream world without war and discrimination.

Throught this festival, you can enjoy the music, sun and if you ever feel like escaping the festival for a couple of hours, you can discover the amazing Novi Sad and its beaches.

Sadly you missed this year’s exit. Who was there? The Killers, Jason Derulo, Robin Schulz and many more!

Would you like to learn more about Exit Festival so that you wouldn’t miss next year’s event? Check out their website!

Since it’s first edition as a small clubbing event in 2003, Let It Roll has continued to upgrade each year, and today, it’s officially the world’s best drum & bass festival.

Located in Czech Republic’s Milovice, each year the festival attracts more and more people. This year’s event will host more than 300 performers in eight stages, such as Andy C, BOP and Camo & Krooked. It’s not uncommon for this festival to have visual effects that blow your mind while enjoying the drum and bass celebration. Stay tuned for more information.

Creamfields festival is a heaven for all EDM, house and trance lovers out there! It’s has been hosted in Daresbury, a village located 30 miles from Liverpool. This

Event has been celebrated since 1997, became international in 1999 and was entitled the Best Dance Event eight times by UK Festival Awards. The festival’s 20th edition will take place between August 24th and August 27th this year, and it was promised to be the best edition of all times.

Cremfields also offers numerous camping events in Dreamfields for its participants. There are plenty of options from choosing to stay in low-key-old-fashioned tents to other ones spicing up the camping game with Luxury Cabins.

In the past years, Calvin Harris and Avicii were some of the headliners. The line up 2017 includes famous DJs such as Tiesto, Martin Solveig, Paul van Dyk and many more.

Tick tock tick tock the clock is ticking –book your tickets before they get sold out!

Last but not least, east London will welcome you to one of the best underground music festivals in the world, Lovebox, for two days in July. We wouldn’t be wrong to say this event was created with love with a box of records in 2002 as the creators Groove Armada and Jools used heart-shaped post-its on their record box while organizing their ‘party’. Its first location being an old strip club in Tottenham Court Road, Lovebox was already in need of a bigger place for the second edition due to its huge success. After changing several venues (and due to selling out very fast every time) Victoria Park has become Lovebox’s home since 2005.

For 15 years, Lovebox has been home to hipsters, hectic parties, vintage bars, body paints and numerous attractions. This year’s lineup includes Frank Ocean, Jamie XX, Rüfüs and many more! This year’s campaign will be such a hit, as #15YearsOfLove is already trending on every social media platform.

Don’t miss out on the lovely festival

And you, the Travelover, which festivals are you attending this summer? Don’t forget to share your best festival moments with #welovetravelwifi !