If you need a break from reality or just need to recharge your batteries a novel can be a great way to escape to another location, perhaps one you never knew existed. However, there’s nothing quite like exploring the actual destinations you’ve only read about, the one’s that, once upon a time, influenced the best literary minds to put pen to paper.

Particularly for bookworms and budding writers this post will give you a glimpse into the exciting real locations that gave rise to works that have inspired generations.  In this whistle-stop tour of the literary greats that have made us wanderlust for Europe we have paired 5 great novels with the location, they’re set in to get you reading and travelling this year!

“I wish I were out of doors—I wish I were a girl again, half savage and hardy […] I’m sure I should be myself were I once among the heather on those hills. Open the window again wide […].”

We begin our tour in the west Yorkshire moors, which sets the scene for Emily Brontë’s Wuthering Heights (and was also the inspiration for her other two sisters Charlotte and Anne). The story is set in the actual area that the author grew up, in northern England, and tells a tale of love and revenge (in no particular order). The Moors are vast, wild and scattered with heather and are truly as picturesque as Brontë describes them.

You can visit “Brontë Country” but you’ll have to tread off the beaten tourist path to get there! Located on the outskirts of Bradford, you can drive or take the train to Haworth (the nearest station). The trek is definitely worthwhile, as you’ll get to walk the very same moors that the famous Brontë sisters would have as girls. This article gives you a full overview of the best route to take if you’d like to explore the scenery that inspired the book and also includes a pit stop at the Brontë Parsonage museum.

“When the short days of winter came, dusk fell before we had well eaten our dinners. When we met in the street the houses had grown somber. The space of sky above us was the color of ever-changing violet and towards it the lamps of the street lifted their feeble lanterns. The cold air stung us and we played till our bodies glowed. Our shouts echoed in the silent street.”

This collection of short stories by James Joyce has inspired many to see Ireland’s capital with new eyes. The stories all take place in early 20th Century Dublin and showcase the lives of the middle class. Like many authors, Joyce’s work centered on a location he knew like the back of his hand and many of the stories featured in Dubliners can be re-lived simply by walking Dublin’s streets.

Dublin is a real gem of a city, which, although small, is filled with plenty of delights including cobbled streets and quintessential Irish pubs (we recommend Kehoe’s) and is fittingly bestowed with the title of UNESCO ‘City of Literature’. If you really want to soak in the literary history you can try the ‘Dubliners walking tour’ organized by the James Joyce Centre or if you’re feeling in a more boozy mood, the Dublin Literary Pub Crawl is a great way to take in the culture with a side of beer.

“The things that happened could only have happened during a fiesta. Everything became quite unreal finally and it seemed as though nothing could have any consequences. It seemed out of place to think of consequences during the fiesta.”

Often described as one of Ernest Hemingway’s greatest works, The Sun Also Rises charts the journey of American and British expatriates who travel to Pamplona in Spain to enjoy the annual Festival of San Fermín. They watch the famous encierro or ‘running of the bulls’ and are consumed by the dancing, drinking and debauchery of this eternal fiesta city.

Pamplona was one of Hemingway’s first obsessions and became known worldwide for its famous festival thanks to his work. The most notorious element of the festival is the encierro, where a group of adrenaline junkies run in front of bulls through city’s narrow streets. The event is as dangerous as it sounds, so we would really recommend you view from a safe distance (since records began in 1910 around 13 people have been killed in the running). To book a place at the event we suggest The Running of the Bulls Travel. The city is located in the north of Spain (about 60 km away from the border with France) and is very easily accessible by air or train. Many of Hemingway’s haunts can be visited today including Bar Txoko, Hotel La Perla and Café Iruña – this guide will give you a complete list of all the places he would have visited over the course of 9 visits he enjoyed in Pamplona!

“I came to Paris with four écus in my pocket, and I’d have fought with anybody who told me I was in no condition to buy the Louvre.”

This classic historical novel recounts the adventures of the three Musketeers (Athos, Porthos, Aramis) and D’Artagnan in their quest to protect the Kingdom of France. The novel, written by Alexandre Dumas, is set in early 17th Century Paris and many of the scenes are based on real locations.

Much of the story takes place in the Luxembourg area of Paris and you can visit the streets where the characters lived including D’Artagan’s house on Rue Fossoyeur (now called Rue Servandoni) and the Musketeers headquarters on Rue du Bac. This handy map charts all of the real locations that were mentioned in the book, so you can plan a tour of Paris through the eyes of the Musketeers without an official guide. From September of this year, you’ll also be able to enjoy the musical remake of the novel at Le Dome de Paris. We highly recommend visiting Le Pot de Terre – a Musketeer themed restaurant very close to the pantheon – for a bite to eat. For more information on visiting the ‘city of love’ check out one of our previous posts here.

“Yet whether the pilgrim air the stranger wore kindled his fantasy or whether some other physical or psychical influence came in play, he could not tell; but he felt the most surprising consciousness of a widening or inward barriers, a kind of vaulting unrest, a youthfully ardent thirst for distant scenes—a feeling so lovely and so new, or at least so long ago outgrown and forgot, that he stood there rooted to the spot, his eyes on the ground and his hands clasped behind him, exploring these sentiments of his, their bearing and scope.”

Death in Venice is a story of a writer (Gustav von Aschenbach) who travels to the “floating city” to break the suffering caused by his writer’s block. The novella, originally written in German by author Thomas Mann, was highly acclaimed and has since been made into a movie, opera and ballet.

Venice has plenty to offer the inquisitive tourist including gondolier rides along the canal, amazing cuisine, shopping and, of course, a timely beauty that has inspired some literary giants including Marco Polo, Shakespeare and Thomas Mann himself. The author actually stayed in the city’s Grand Hotel des Bains on the Venice Lido (both of which feature in his book) whilst writing his novella. Whilst you cannot visit the hotel anymore (as it has sadly closed down) you can walk along the Lido (a 7-mile long sandbar) that is famous for hosting the annual Venice Film Festival. Take a free walking tour of this water city or take in the sites from your very own Gondola cruise.

We hope this list has given you some inspiration for your next trip abroad (or to your local Barnes & Noble). Our top tip for exploring new cities is to make sure you always have access to the internet whilst you’re on holiday. This will help you check those trusted Trip Advisor reviews before you have a pint at James Joyce’s local pub, allow you to get perfect snaps of the bulls in Pamplona, and also let Google maps guide you through the very same canals that Marco Polo wandered as a young man.

Tep offers you the safest, securest and most cost effective way of accessing the internet when you’re away. For one fixed daily cost of $9.50, you can enjoy truly unlimited data for up to 5 devices on the go (the device is pocket sized and works in over 80 countries worldwide). With Tep you’ll never have to worry about returning to a shock bill or being stranded without access to the web – so you can leave the drama to the writers! To rent or buy a Tep portable wifi device click here. 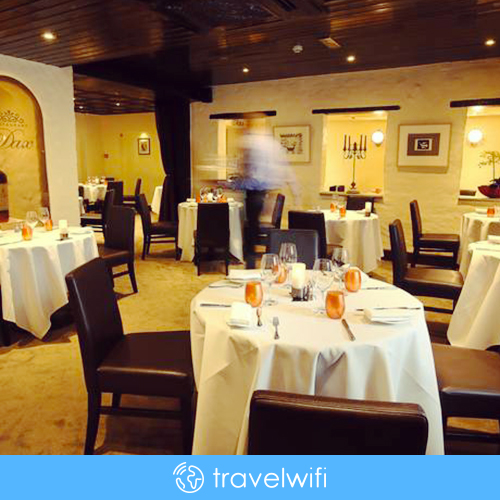 France away from France: Best French Restaurants around Europe